Yes, I am a DevOps, Big Data, Security kind of guy and I use Amazon AWS, Microsoft Azure and OpenStack, as well as other smaller players. But I like to take a new diverse, contrarian look at stuff the Cloud community seem to have kind of pre-determined agreement.

I am sitting at the OpenStack conference and learning about the cool news ways it can give you an edge. I believe that Open Source and OpenStack is at the heart of getting an edge. You need mature, fully supported vendor based platforms. But you also need at some points to move fast, faster, fastest. At that edge point Open Source and Open Stack are the tools you want to use.Those "free" toys, do have a cost spent in learning curves, education, cultural change and efforts to workaround cases of immaturity. When they mature, they join your base tool set as other new roughly edged opportunities arise.

However, looking at Cloud platforms, it is clear what they ask for are applications that can be spread across many computing nodes. Most of the current applications enterprises use are not set for the cloud.

While everyone in the Cloud Community is expecting the Enterprise to re-write or convert their applications to the cloud, Enterprises naturally just want the job done.

What the "Legacy" applications want is "Duolc" ("Cloud" spelled in reverse) deployed on "StretchOS".

So "StretchOS", a term I just made up, should be able to group a bunch of resources and make it so it behaves as a unified single operating system running on a single computer. The CPU, Memory, Disk and Network resources will be highly available and processes will be able to be served on any of the computing resources.

I am not aware of someone developing something such as "StretchOS", but looking at the vast amount of applications that could immediately and effortlessly benefit of such a solution should attract a close look of entrepreneurs. This could be a cross-gap solution until most of the apps become cloud-enabled.

Now, as I dumped this crazy concept on your desk, I can go back to my Cloud deployments..

Yeh, you all are using Amazon AWS…

But sometimes when you get the urge to try something new, maybe control your AWS operation from an other cloud providers cloud, maybe try Azure 🙂

Here is how to quickly Launch a Ubuntu (or basically any Linux) VM on Windows Azure in less than 1 Min.

Firstly, you may want to set-up this environment for better Azure usage

Create the certificate for your new Ubuntu VM: (use Cygwin or any Linux):

Using the Azure Web Portal create a new Ubuntu or VM from the Azure templates and use the myCert.pem for the Azure new VM configuration

Prepare a Putty version of your Azure Cert for the VM:

load myPrivateKey_rsa into puttygen and ask it to create a new private key of this
Use .ppk for the output of puttygen private key
Use the new .ppk file for putty ssh session to the Azure Linux VM

Power on the VM (at the Azure portal)

More bigs news from Microsoft – Microsoft's Cloud Platform System (CPS) –  (I call it Azure Cloud "Private Edition") –  a joint announcement from Microsoft and Dell, which offers a bundle including Dell Racks with expandble computing, storage and networking, running a private Azure cloud (on premise) that should look and work the same as Microsoft's public Azure offering.

You can create multiple tenants to represent different groups, organizations or sub-companies and lauch Windows and Linux instances. You can expand the hardware to support hundreds or thousands of VMs.

In continuation for its future Docker based Windows containers support for Windows Server and Azure, it looks like Microsoft is on a roll. This time, looks like its Cloud Platform System offering goes head to head with VMware's EVO:Rail offering, announced just few weeks ago in the VMware World 2014 conference. This is also an in-direct competition with Amazon's offerings, which could have a hit-run with customers massively using Microsoft's technologies.

This might also be a nice fresh innovative-direction for Dell, and certainly shows it is working hard to create new interesting offertings, which makes you wonder, what else is coming next.

Now its time to look deeper into the new system, maybe try and download the Windows Azure Pack and see how it can be used on your current hardware…

What do you think?

Blogs I Contribute To 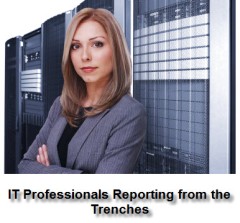 Listen to My Blog Posts (iTunes)